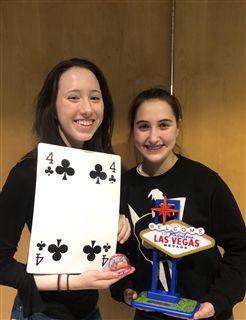 2/5/2020
SA Debate flew to Las Vegas, Nevada to debate at the highly competitive Golden Desert Invitational, held at the University of Nevada, Las Vegas. Competitors traveled from far and wide to attend this national circuit event, including students from 16 different states and from as far as Taiwan.
The team of Ivy Brenner '23 and Tabatha Stewart '22 dominated the competition; they finished their preliminary rounds as the tournament's top seed, and were the only undefeated team in their division. Due to their first place finish in preliminary rounds, they automatically advanced through the quarterfinal elimination round. They ended their impressive run in semifinals, reaching the elite top four of the tournament. In addition to her impressive semifinals finish, Tabatha Stewart was also recognized as her division's 4th place speaker, outranking nearly 50 other competitors. Ivy and Tabatha have made it clear that they are the new team to watch on the West Coast.

The team of Iris Anderson '23 and Maddy Jannes '22 earned a winning record. They defeated teams from Los Angeles and Chicago, and finished in the top eight teams in their division. The team of Hannah Nabavi '20 and Adri Kornfein '21 won multiple debates and were just one debate away from advancing to elimination rounds. Every SA team won at least one debate, cementing our rise on the national circuit.

Huge thanks to Marco Morrone, who chaperoned at the tournament. Next up, Speech and Debate head to the Stanford Invitational.
Back

...is the only private, independent, college preparatory high school in Sonoma County. On our beautiful campus nestled at the base of Taylor Mountain in Southeastern Santa Rosa, our students are able to explore their interests and passions in a rigorous and inspiring environment that develops a lifelong love of learning and prepares them for college and beyond.


Sonoma Academy admits students of any race, color, national and ethnic origin to all the rights, privileges, programs, and activities generally accorded or made available to students at the school. We do not discriminate on the basis of race, color, national and ethnic origin in administration of its educational policies, admissions policies, scholarship and loan programs, and athletic and other school-administered programs.